The sculptures that I make have developed from early carving in stone and then refractory brick, in which I carved negative shapes into which bronze was poured, to modelling in wax for small work or in clay for larger pieces, which are then cast in bronze or occasionally in cement or resin.

My sculptures are almost always of people, often celebrating something, because I get my inspiration
from where I live. I have also made portraits and modelled birds, including owls, flamingos and hawks, cats, dogs, donkeys, goats and other animals when the opportunity has arisen, such as the 36 Terns for a water sculpture at Dudley.

I enjoy working on a commission and hope that the work, which is generally figurative, will be self explanatory without the need for a title: I have come to realise that the sense of freedom and hope that I experienced as a teenager in Holland after five years of occupation in World War II has really never left me and that it still colours my work.

One Man Shows include: 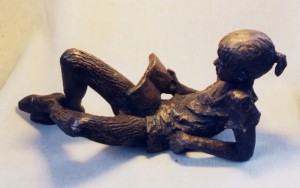